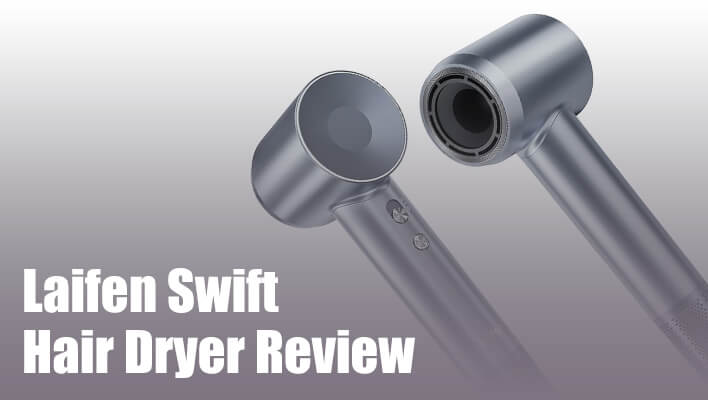 We’ve seen tons of Dyson alternatives over the past few years, but none of them really reached a standard that truly amazed us. Interestingly, I heard the emerging Laifen Swift hair dryer is a new impressive model compared to other Dyson dupes and it’s much cheaper than a real Dyson. We’ll see if this is a good blow dryer that you should be looking for in this test. And we will be doing a Laifen vs. Dyson test as well.

The Laifen hair dryer features a Dyson-like design, with a smooth finish, compact dryer, straight handle, and filter at the bottom. Among hair dryers from popular brands, Laifen seems to make the Swift hair dryer pretty small. If you have both the Dyson Supersonic and Laifen Swift, you can see the upper part of the Laifen Swift is obviously smaller. Thanks to that, the Swift blow dryer also produces less noise than a regular hair dryer, but I have to tell you it’s just slightly quieter. Laifen says that this dryer work at only 59dB.

The Laifen Swift hair dryer’s motor is totally solid, though they didn’t say it comes with a game-changing motor. The specs say that the motor can reach 110,000 rpm, and the air speed of the nozzle is up to 22m/s. To be honest, it’s not the most expensive dryer motor in the world, but I can guarantee you that it’s as powerful as a Dyson Supersonic.

One thing about the Laifen swift is better than Dyson – It has a LED Ring indicator that shows you if the air is hot, warm, or cold. This is something that Dyson won’t provide. Besides, we also found the control buttons are more convenient to use compared to Dyson. You only have two buttons and you just need to push one button up to adjust the heat.

Dyson blow dryer is known for its price, and not everybody wants to pay $400 for a dryer. The Laifen Swift is a good alternative, offering a lot of the same advantages of Dyson but for a much lower price, it only costs you about $170.

Not as aesthetics as Dyson

Everybody knows it looks like a Dyson, which looks creative and luxurious. However, on the downside, it doesn’t have the Unique Dyson bladeless hollow design. So it doesn’t give you the high-end feeling like a real Dyson, and the finish of the Laifen Swift is not as shiny as a Dyson Supersonic. People may think this is a cheap Dyson dupe especially when the Laifen brand is not that popular right now.

Attachments in the box

I have to admit that Laifen surprised me that they actually use magnetic attachments on the Swift hair dryer, just like Dyson. But what I don’t like is that they only offer a nozzle in the box. What’s more, they don’t have enough attachments to suit every customer’s drying needs while the Dyson has many more options.

The Laifen Swift is a hair dryer with user-friendly heat control buttons at lower prices than Dyson. But, the dryer is not as precise as the Dyson Supersonic when it comes to temperature adjustment. When you set the mode to hot, you only have two settings to choose from. And you can not adjust the air speed and heat levels freely just like Dyson, I guess this is something you must sacrifice for convenience.