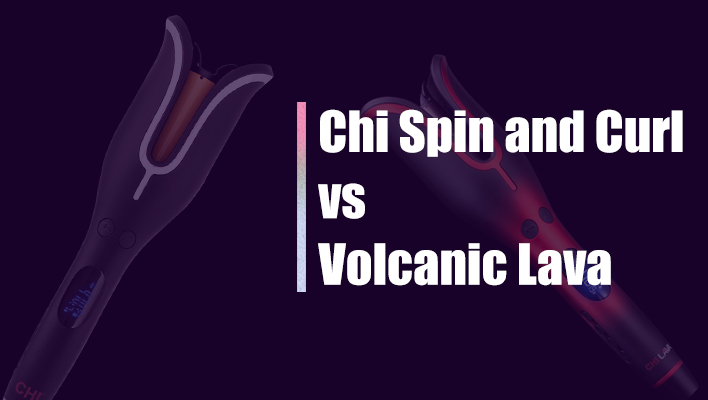 If you are looking for a modern curling styler from Chi, you are pretty smart! The Chi Spin N Curl curling styler is one of the best sellers for its great performance to create flawless beach waves.

Here is the comparison chart where you can find the differences between Chi’s original Spin and Curl curling irons and the Chi Lava curler. (All the differences are in red)

Regular Chi Spin and Curl irons have more options in colors such as black, matte black, white, mint green, red, rose gold. When it comes to the Volcanic Lava Spin and Curl, as the name suggests, the curler is covered in red and black, just like the color of lava and volcanic rock exactly.

Colors aside, these two types of Spin and Curl stylers are identical. Compared to traditional curling wands and curling irons, the Chi Spin N Curl curlers are easier and safer to use. And how to use these stylers is simple: the Chi Spin N Curl curling chamber can automatically curl your hair and you don’t need to wrap your hair around the barrel manually. The funny fact is, if you have watched the animated television series called Ultraman, I must say the Chi Spin and Curl curler really looks like the transformation device in the show.

Actually, the Spin and Curl and the Lava edition curler both have different sizes. You can choose the barrel size that is suitable for your hair length, and they offer 1-inch barrel and 1.25-inch barrel on their official website.

Both models offer top-notch styling ability with smart pre-set temperatures, and you can easily monitor the curler’s working status with the large screen on the handle. Both Air Spin N Curl and Lava Spin N Curl offer 410°F maximum temperature, and they all have the dual voltage feature to let you use the curlers abroad.

The biggest difference between the Chi Spin and Curl and Chi Lava Spin and Curl is the material of the barrel. All the Spin and Curl curlers are equipped with ceramic barrels, leaving your hair, smooth, shiny, and healthy. Compared to regular Chi’s curlers, the Chi Lava Spin and Curl is infused with lava rock. And I was told that the infused lava rock can help the curler style your hair with even heat and help you achieve great results without using high heat that causes damage to hair. That’s also why the Lava one is more expensive on the market.

Does the lava barrel really work? Probably, but not very obvious. I have tried the Lava Spin and Curl once in my friend’s house. When you turn the heat to medium, it still takes longer than using a regular Spin and Curl with high settings. So if you are buying this for a quicker styling result, the original Air Spin and Curl and the Lava do not have a huge gap. When it comes to final curling results, I would say the Lava curler is more pro since I think it gave my hair more smoothness and softness by 10% to 15%. But I don’t know if it is a psychological effect because the Lava curler is more pricey.

The price of the Chi Lava Spin and Curl is $129.99 on Chi’s website while the normal Spin and Curl is $99.99. Generally speaking, they do not have big differences in styling results. But the Chi Lava curler is probably more healthy for people who have damaged hair or brittle hair because of the Lava rock material (A heat protectant is still a must).