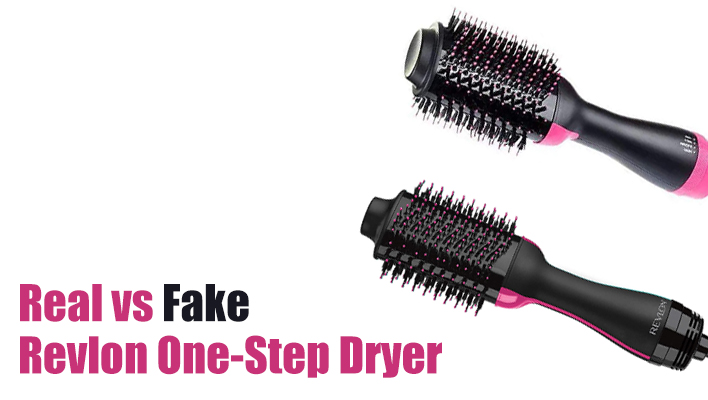 I actually got this fake Revlon One-Step on purpose since I want to test if a cheap hair dryer brush can be used on hair properly.

Do They Look the Same?

They did look identical when I opened the packages, but they were not 100% identical after I took a closer look at both of them. I would like to share some differences here so you can spot a fake Revlon One-Step hair dryer when buying.

1. The real Revlon One-Step hair dryer comes with a clear Revlon logo at the bottom while the fake one does not have it.

2. The pink color of the original Revlon One-Step hair dryer is darker than the fake one. And the real Revlon’s black components including the cool tip are matte while the fake Revlon’s surface is a bit more glossy and reflective.

3. The shape of the cool tip is different. The real one comes with a small but deep oval while the oval tip of the fake one is longer, flatter, and thinner. It is not a sign of poor making, just not on the real Air Jordan.

Although the fake one’s heat settings do not look exactly the same as the real Revlon One-Step styler, it did get the job done nicely indeed.

The fake Revlon hair dryer comes with 3 heat and speed settings too, just like the authentic one. When I was using the fake Revlon hair dryer, I did not feel much difference when it comes to drying power and drying heat. The knock-off did not deliver a very bad performance and it was not stuck in the hair at all. After styling my hair, my hair looked pretty soft and shiny as well. And both hair dryers can dry and style my hair in 20 minutes.

And another thing that I noticed was that the fake and real Revlon dryers had a different sound when working. I can not judge which is louder as they are both acceptable, but the pitches are totally different.

Well, so I should go for a cheaper Revlon One-Step styler knock off? Although the fake Revlon hair dryer has a much cheaper price and it works okay, I still recommend buying the real Revlon One-Step dryer.

Hair Brushes with Retractable Bristles - They Accommodate All Hair Lengths
Fake vs Real Dyson Supersonic Hair Dryer - How to Tell?
How to Remove the Concentrators from Your T3 Hair Dryer?